Lessons From “My Octopus Teacher”.

I sat down last night needing some “me” time and fortunately hit the perfect movie for self – reflection, “My Octopus Teacher“. Like myself, the protaganist Craig, is going through a bit of a late life crisis. For some reason, he’s compelled to dive and explore the underwater world. He meets and learns from one amazing octopus whose life he becomes immersed in for a year.

As I watched the world of Craig and the octopus inter-connect, I found myself thinking of life but most importantly education – the thing I’ve been so absorbed in over 30 years and now feeling a little lost and pessimistic about.

So here are some lessons I took away about education, teaching, the whole process of personal learning and growth. I hope some of these hit you – or even change you.

1. This world is temporal – teaching even more so. Basically, the whole movie reflects the existential fact that our life is momentary, ephemeral and ruled by entropy – we are always coming and going. Things pass by and never come again. Nothing sticks, nothing stays. All flows towards its end.

I’ve written previously about how hard it is in teaching – always saying good-bye. You nurture and grow these deep relationships and then “boom” – the students move on and it’s over. Same with Craig and the octopus. It seems sad but isn’t once you embrace Craig’s words, “the purpose of your life is NOW“. So that of a teacher – to bring home the bacon, nurture, be there, teach despite this ephemerality. You won’t last long in the profession unless you embrace this fact deep in your soul.

Related to this point is a fact that Craig mentions – the octopus’ life is short, only one year long. Life is finite for us all – use your time well. As well, let’s use our time at school well. Make it count.

2. The true core of education is getting students to notice.

Craig asks the question, “Why do the same thing, go to the same place, every day?“. Each day he visits and observes the octopus in the same kelp forest and in the same fashion and manner. His answer is full of wisdom – to notice, to see. By going deeper instead of wider, he has learned a loud lesson about intelligence and the educated mind. Knowledge is not the quest, it isn’t about more numbers, more stuff, more trivia and facts. True education begins when we open our doors of perception and begin to see what we normally don’t. Genius is thus.

In education, we stuff kids, students, full of straw. Banking information, regurgitate this, memorize and spit out. But that’s not what sticks, what stays, what is true “educare“. To truly become an autonomous learner (the goal), students need to dig deep into the world that calls to them, of which they are abundantly curious (as Craig was about his octopus). In doing so, going deep (like Kiernan Egan’s program “Learning In Depth“), they’ll truly “see” and be filled with what is truly the golden egg of education – insight.

3. Intelligence is tacit, personal knowledge. Throughout the film, you see Craig slowly “undress” from his robes of school and university and culture which puts man as the crowning form of life and intellect.

We see Craig, homo sapien sapien, marvel at the intelligence of the octupus, how it is a master of deception, or can outwit in a moment the pajama sharks lurking everywhere. Craig has learned an important lesson – there are no lesser or more intelligent life forms. We fool ourselves and we hurt students when we grade, label, measure them based on a standard formula. Each of us is intelligent, a marvel, a miracle of membrane, synapses, carbon, calcium, and sinew. Education, schooling needs to focus on what students can do – in and of themselves and their own environment. Instead of the industrial, assembly line, automized approach we do take. We also have to teach students that they aren’t “top of the heap” and to value all life as intelligent (more on this later).

4. Learning isn’t unidirectional. In the film, the octopus almost dies and loses an arm. Craig thinks it won’t recover but it does! It grows back the arm it lost but not until a good period of recovery where it loses its color and remains stationary, hidden away.

So too with learning. “We learn by our mistakes.”. We often need to take one step back in order to jump further ahead. Failure is the foundation of all education. Imagine the scientific method without trial and error? Even Mozart at one time played and hit many poor notes.

5. “You are part of this place, you are not a visitor.” Craig realizes this and it is such an important learning point in the movie. In life, in education, we are on a moving train – there is no such thing as a non-participant. And this makes us responsible for ourselves as well as the whole. We bear a responsibility for our fellow learners, our community, our world. We aren’t visitors.

For education, it also means that we aren’t passive consumers of information. Education is a process of involvement in the world, participation in the world, creation with the world – praxis. Our curriculum needs to unshackle itself from the classroom and make learning be part of the world, have an impactful presence and students engaged in real, purposeful actions in the world. All grades. Education is flowing water, it isn’t just the filling of a bucket. We are not visitors, we are involved, we need to be involved. Craig shows us learning is about experiencing the world, the experiences we have. It is this which will linger, will remain and which is education, learning.

Being a part of this place, this world – brings into focus another fact sorely under-represented in education – our environment. We need to bring environmental education into the front and center place it deserves. Teach science through this – environmental education isn’t just an add on, something to look at if there is time at the end of the year or syllabus. We need to provide students with experiences so they value all life, all intelligences and truly absorb the fact they aren’t visitors but at home and a part of this world.

6. Focus on character, not facts. Craig brings in his son towards the end of the film. He is proud of his son’s “gentleness” and how experiencing the underwater world has made his son value and appreciate life, recognize his own powers and responsibilities and become sensitized to the true vibrant nature of all life forms.

What’s going on here is that Craig’s son is being schooled, developing character. We should not forget for a moment that school has a major role in developing the character of our youth. Yet too often, it fails. We need to fix that – with some of the things I’ve noted above and some other things. But we ignore this at our peril.

7. “Love and do what one will”. At the beginning of this article I noted that the whole film was essentially about the ephemeral nature of life, our existence. True. But also this whole film is about love, it’s a love story. An example for our students in what happens when you allow yourself to go towards the unknown, embrace the other, fall in love with the unfamiliar. It is a love story.

Value our relationships with students. Education is passed on through these vital relationships. Embrace all students, not just the ones with the answers, the ones like you, yourself in your youth. Grow in those relationships – love is this beautiful two way street. Craig demonstrates that soo well, finally realizing after much questioning that yes – the octopus did get much out of their relationship. Joy, companionship, learning …. 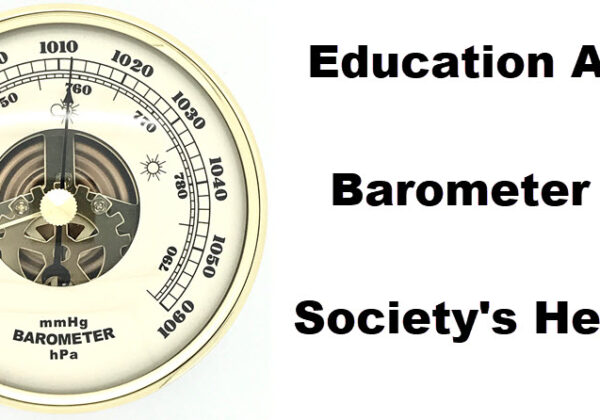 These summer days, I've been thinking lots about the role education plays in the "success" of a society, culture,…

Ideally in any teaching dynamic, this is our ultimate goal - teachers seek their own demise, as this quote…

I just got home after a morning of observing two classrooms. One was wonderful, a place that all students would long…